Not having written anything for a week, I think I've forgotten how to do it, so forgive me if this post doesn't pan out quite as planned! I've been at my mother's again, as she is still not well, and everything else seems to have gone by the board. However, I returned home to find those lovely people at Persephone Books have included a snippet from one of my reviews ('How to Run Your Home Without Help' by Kay Smallshaw) on the 'Our Bloggers Write' page of the latest 'Biannually', and that really lifted my spirits. Definitely a 'pleasing' as Lyn at dovegreyreader would say, and I am delighted that Persephone liked what I wrote.

There seemed to be a fair amount of catching up to do, but after I'd tackled the washing, looked at the ironing pile, and shoved all the junk lying around the house into cupboards and drawers where it can't be seen, I bought myself a bunch of flowers, made a cup of tea, and dipped into the book again to find out what the perfect housewife did circa 1949 – without actually following any of the advice!

Then the postman delivered my copy of Sylvia Townsend Warner's 'Lolly Willowes', which was another pleasing, as I am really looking forward to reading it. And a friend invited me round this morning for a cup of tea and some home-made cake, and I've been asked to meet up with another friend this evening to celebrate her birthday. And the sun is shining (although it's a bit windy), and the leaves on the trees are turning to glorious shades of yellow, red and orange. So there you are: lots of 'pleasings' or cheerings to make me thankful for the good things in life.

Anyway, the purpose of this blog was to write about a book, but because my brain is not in gear, and I can't think about anything serious, I couldn't decide which book, so here are my thoughts on Gunpowder Plot by Carola Dunn, an author I have never read before, but people kept telling me I would enjoy her Daisy Dalrymple mysteries (published by Constable and Robinson) – and I did!

Let me start by saying that if you like your reading to be difficult and challenging (like this year's Booker judges), then this is not the book for you. And I wouldn't recommend it to anyone who likes their crime novels peppered with violence and gory descriptions of dead bodies, or to enthusiasts of of taut psychological thrillers. 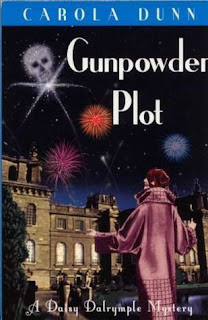 But I don't like any of those things: I like my crime to be gentle and cosy, and that is exactly what 'Gunpowder Plot' is. Daisy, daughter of a viscount, is a thoroughly modern young woman (but do bear in mind this is 1924) and earns her own living as a jourrnalist. She is visiting old schoolfriend Gwen Tyndall to write about the family's 400-year-old bonfire festivities.

It should be a pleasant assignment, but all is not well, for tensions are surfacing in the Tyndall family. Gwen's eldest sister Babs, who is running the estate, clashes with their traditionalist father over modern farming methods, while their brother Jack is also in trouble because he wants to be an aircraft engineer. Then, after the firework display, hot-tempered Sir Harold and a female guest are found dead. It is thought Sir Harold has shot the woman and killed himself, but it soon becomes apparent that both have been murdered and the culprit must be one of the family, or the dead woman's Australian husband.

Daisy's husband, Detective Chief Inspector Alec Fletcher (from Scotland Yard), is called in to investigate, aided by Daisy herself, and the story romps along along at near break-neck speed as local VIPs squabble about who should be in charge, various family members are questioned, and hidden secrets come to light...

It's not great literature, but it's not that badly written, and while the characters may lack depth, they are not so two-dimensional as to be unbelievable, and they are not caricatures, although they are viewed in a very conventional way – roughneck, uncultured Australian; autocratic landowner, and so on. There no great insights into human nature, and it's not too difficult to guess the killer, but there are enough twists and turns in the plot to keep you reading, and there's enough period detail to be convincing. I'm not sure how accurate the police procedures are (not very, In suspect), but the same could be said for an awful lot of crime novels, and this was such fun that I don't care! It's all down to the willing suspension of disbelief I guess, but I really did enjoy it.

Daisy herself is a rather charming amateur sleuth, who is sympathetic and intelligent, and finds herself a key witness to events at various points in the story, as well as using her charm and sympathy to gain information from people without them realising what is happening. In this novel she is six months pregnant, and spends much of her time ravenously hungry or desperately needing the loo, which added a touch of humour (and, contrary to what I thought at first, did actually have a bearing on the main plotline).

I gather there are about 20 Daisy Dalrymple books, but I seem to have plunged slap bang into the middle of the series, so I need to backtrack and start at the beginning, if only to discover how Daisy and Alec first meet.
Posted by Christine Harding at 4:19 pm