A House on Stilts 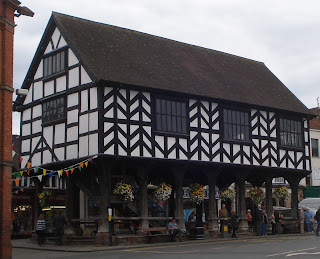 Ledbury, in Herefordshire, is one one of those beautiful, historic, little towns where everything in the town centre seems to be hundreds of years old. It's where my mother lives, so while she was ill and I was looking after her I took the chance to wander around and take some new photographs, since most of mine were taken a long time ago, so here are a few for this week's Saturday Snapshot.

The Market House, a distinctive black and white building, stands on 16 wooden stilts, with narrow steps leading up to the entrance. It dominates the main street and is generally regarded as the jewel in the town's architectural crown – and when you see how impressive all the other buildings are you realise this one has to be pretty special. 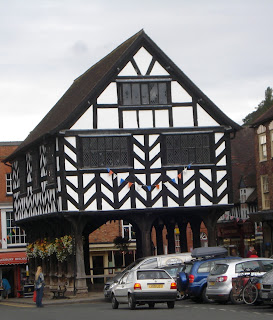 Timber framed, with brick infill, it was built in the 17th century as a corn warehouse: the grain was stored inside the raised structure, where it was protected from the weather and was safe from rats, mice and other vermin, while traders sold their wares from stalls and shops in the covered area below. A market is still held there twice a week, which is a nice link with the past I think.

Work started in 1617, but was not completed until 1668 because somewhere along the line cash (raised by public subscription) ran out. Eventually the trustees took money from legacies set up to provide clothing for the poor, and in return were supposed to provide 12 sets of garments each year, paid from the profits made by renting out the Market House. It sounds a pretty fair deal to me, but I've no idea whether the promise was ever carried out! 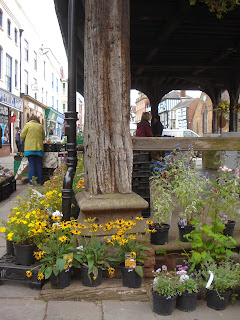 At that stage the house itself had two floors, and it's possible one was use for storage, and the other for meetings. But when the Turnpike Act was levied in the early 18th century, traders couldn't afford to pay the toll gate taxes, so they brought samples of corn to the market, and the building where they had previously paid to store grain got emptier and emptier, and had to be used for wool, hops and acorns for the local tanning industry. I knew very little about the Turnpike Act, or its effect on people, but that's what I like about local history - you like at a building, and think how gorgeous it is, then discover a whole social history attached to it!

It brought in little money and was rarely full. However, the enterprising Victorians stripped out the inside, leaving the outer shell intact, and created space for meetings, exhibitions, sales and performances by travelling theatre companies. It was also been used as a Town Hall. Today it still provides a venue for meetings, sales and exhibitions and, more recently, weddings were held there, but the Disability Access law put paid to that. 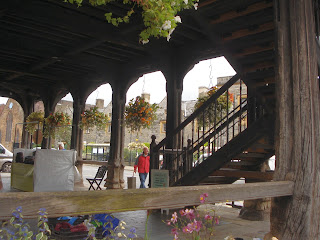 It's thought much of the construction was undertaken by John Abel, who was appointed King's Carpenter by Charles I. He was a local man, and a number of Herefordshire buildings are attributed to him, but there is no evidence to support the theory that he was involved with Ledbury's Market House. The wooden supports are made of oak, and were repaired and strengthened in 2006, when the entire building, including the posts, was raised into the air with the aid of hydraulic jacks. It was a tremendous feat of modern engineering, and somewhere I have a photo showing it surrounded by scaffolding, and perched on metal framework, but I can't find it anywhere, although I have searched and searched. 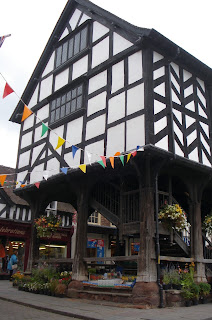 For more Saturday Snapshots see  Alice's blog at http://athomewithbooks.net/
Posted by Christine Harding at 11:10 am