The Song of Achilles

Madeline Miller's 'The Song of Achilles' is, as the title tells you, the story of Achilles, one of the great Greek heroes of the Trojan War, and it's a wonderfully lyrical account, told from the viewpoint of Patroclus, Achilles' friend and lover.

Those of you who know your classics (Homer's 'The Iliad', or Virgil's 'The Aeneid') will have encountered Achilles before and may wonder how Miller copes with complexities of giving a semi-divine hero human attributes, let alone the difficulties of portraying gods, godesses and mythical creatures like Chaeron the Centaur. But manage it she does, and she does it so well you believe in her creations without question, and it never seems silly.

It's a long time since I read 'The Iliad' and I'd forgotten how quarrelsome those Greek heroes were, and how disorganised. They may have been called to defend the honour of Menelaus by recapturing his wife, but they are kings of individual city states, and are not keen on taking orders from anyone – though they are not averse to acquiring women and loot during the skirmishes which mark their ten-year siege of Troy. And they crave the glory war will bring, ensuring that their name will not be forgotten, and their reputation will last, even if they fall in battle.

Here are Agamemnon, Diomedes, and Odysseus, who has always fascinated me. He's as clever and cunning as you expect, a talker rather than a fighter, planning strategies and offering counsel, a seemingly sane voice in a world gone mad. His motives are not clear: he is slightly detached, amused by the behaviour and actions of his fellow Greeks, but you never know if he is acting for his own interests, or those of the army. 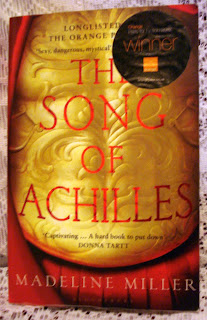 Anyway, this is a novel about Achilles, not Odysseus. To give some background, it has been foretold that Thetis, a minor deity (she's a sea nymph), will bear a son who is greater than his father. To avoid the awful possibility that her future child may be powerful enough to overturn the divine order, the gods give her to a human king, Peleus. There's no mention of the story where she dips baby Achilles in the River Styx to make him immortal, but forgets that the heel she holds is vulnerable, but she is fiercely determined her son will become fully divine, and goes to great lengths to prevent the death that fate has in store for him.
Meanwhile young Patroclus, son of another minor Greek king, is exiled after accidently killing a boy in an argument. Patroclus, a gentle lad, is no good at fighting or games or any of the other things his father values, so he sent to be fostered by Peleus and meets Achilles.

The growing relationship between the two is tenderly drawn, and as time passes the two sides of his character become more marked: there sensitive, loving man, who is a gifted musician, and the proud fearsome fighter who stands on his dignity and refuses to bow to Agememnon's greater authority. As the long seige drags on and on, the dispute between the two men escalates, and Achilles refuses to fight – partly because his honour has been called into question, and partly because a prophecy says he will die when he has killed the Trojan hero Hector.

Eventually, to save the Greeks, he agrees that Patroclus, who is no fighter, should don his armour and lead his troops into battle – and from that moment the end is inevitable, for Achilles cannot outwit fate. Grief-stricken when Patroclus is killed by Hector, he vows vengeance, kills – and is killed.

It is not nearly as bloodthirsty as it sounds, and there is peace absolution at the end, when grieving Thetis speaks to the shade of Patroclus. To ease her pain he tells her of the Achilles he knew:

I conjure the boy I knew. Achilles, grinning as the figs blur in his hands. His green eyes laughing into mine. Catch, he says. Achilles, outlined against the sky, hanginging from a branch over the river. The thick warmth of his sleepy breath against my ear. If you have to go I will go with you. My fears forgotten in the golden harbour of his arms.

The memories come, and come. She listens, staring into the grain of the stone. We are all there, goddess and mortal and the boy who is both.

The goddess and the mortal soul, who have never liked each other, reach an understanding. When Thetis says 'I could not make him a God', Patroclus' spirit offers comfort. “But you made him,” he says. And, at the end, that is enough.
Posted by Christine Harding at 7:33 am